I am starting a new page to act as a platform for those people who have a creative bone in their body, which is, in fact, all of us. Everyone, at some time in their lives, has jotted down a few original words, written a short poem or a few notes of a tune. Please feel free to post any original words, stories, poems or songs. Likewise, if you have a CD launch coming up, a gig to advertise, a book published etc. The aim is to allow people to get their work online, gto ask for feedback or just to publicise their achievements in the sphere of creativity. Hopefully, we will have some interesting, engaging discussions on creativity-related topics.
Posted by Toni Bunnell at 14:03 3 comments: 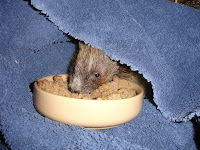 Roger has had a fairly uneventful winter. Xmas came and went with no surprises and he has become quietly used to his routine. When he hears his name mentioned he springs into action and awaits the arrival of food. Amazingly he failed to put on any extra weight over Xmas, thus defying all the odds and leading others to ask how on earth he had achieved this. He could only respond that he had stuck to his normal eating pattern and had eaten no more or less than usual. Needless to say his fellow hedgehogs were full of admiration!
He was aware that spring was in the air and had recently been listening to increased bird noises in the garden. Having spent all of the winter cossetted in a heated room, namely the kitchen, he was now starting to ruminate about what life might be like on the outside. While the quail brooder was fine for the cold months it was no replacement for a life foraging in the undergrowth, never knowing what you might come across next. Yes, Roger was eagerly waiting for spring.
Posted by Toni Bunnell at 00:17 6 comments: 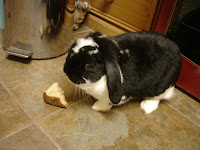 Eight inches of snow fell on the North Yorkshire Moors last Thursday. Not good as we were travelling back to York with hedgehogs in tow. All hedgies in the sanctuary, bar one, are now in a heated unit as the temperature fell to -13 one night, with the threat of more snow still to come. No chances are being taken with all the guys who have struggled to make it through so far. Roger is actually still in the kitchen, living it up in the Quail brooder and sharing the kitchen with Benjamin the rabbit. Benjamin has been in the wars having been bitten by a rat in his open outside run, followed by an urgent operation to remove the abscess, and is now recuperating.
Roll on the warm weather when all the little guys can go back outside and back to the wild.
Posted by Toni Bunnell at 04:22 No comments: 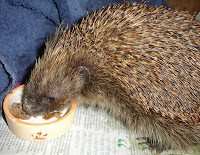 Roger was not going to be beaten easily. Life was too good and after all Christmas was just round the corner and he was eagerly anticipating his presents. He seemed to be being monitored round the clock judging from the number of times his towel was lifted up and he was checked. As if by a miracle, after the unbelievably short time of 3 days, he started to make a recovery and bounced back into the land of the living. This time he bypassed the scrambled egg (rather ungrateful thought the carer who had prepared it just how he used to like it - slightly warm and not too over-done). But no, this time he was going straight for the pedigree chum puppy meat. He still wasn't feeling a hundred per cent though and was being topped up with esbilac. Things are looking good again for Roger.

Roger goes off his food 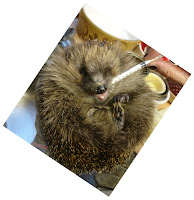 Roger stopped eating. At the turn of midnight 2 days ago he lost all interest in food. The temperature fell below zero in the night, the water in the bird bath had frozen solid and Roger had pneumonia - again!
Before there was time for self-pity to kick in he was moved to the Quail brooder in the kitchen faster than the blink of an eye, faster than a Roe deer taking flight and certainly faster than Roger moved on an average day.
Now in intensive care his spirits rallied and he saw a ray of hope on the horizon. In his quiet, contemplative moments he reflected on the fact that he had seen stardom in his life and his fame was spreading...

ACTION: Keep warm and dry in kitchen; Start regime of Baytril (oral antibiotic) 0.5ml twice a day for 7 days; start Septrin (sulphonamide and antibiotic that deals with certain bacterial infections and also protozoans that cause Coccidiosis, indicated by green poo); Start Telmin for lung worm, Crenosoma striatum,(1 ml a day for 5 days); syringe feed esbilac several times a day to keep Roger hydrated.
N.B. When syringe feeding it is always best to hold a hedgehog in the most upright position possible. This prevents any liquid from being breathed in by accident. This is particularly important with baby hedgehogs that can develop inhalation pneumonia by inadvertently breathing in fluid which then reaches their lungs. With Roger this was the only position that worked, though I tried to hold him more on one side whenever possible.
Posted by Toni Bunnell at 23:50 2 comments: 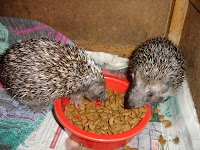 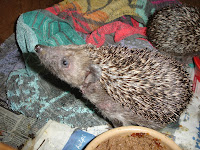 Amos and Billie had won through and their spines had grown back. They now looked fantastic and were ready to pose for photographs. Billie, in particular, thought he would look good in the 'Ah Bisto' ad from days gone by. They still lived in the old Quail brooder in the kitchen as no chances were being taken with them. After all they had been through so much and come so far.
Posted by Toni Bunnell at 22:57 2 comments:

Joss passed away over night. Help had arrived too late. By the time he arrived at the hedgehog sanctuary he had been starving for days and possibly weeks. Despite every effort being made, nothing could save him. Heartbreaking to see and so frustrating. If only he had been found sooner and been taken into the warm and safe surroundings, aptly named 'sanctuary'.

ACTION: Many people see hedgehogs wandering about in the daytime for several days before they decide to act. This is not usually due to a lack of caring but because they see posters telling them not to pick up baby birds they see on their own, as the parents will be watching the baby, just waiting for the person to go so they can return to feed their baby. This is completely true. The same is also true for young foxes and deer. The mother will be watching and waiting near by and unless the young fox or deer is obviously in distress or injured, it should be left totally alone. However, the same is not true of hedgehogs. Any hedgehog found out in the day is desperately in need of help. At this time of year, any hedgehog found out in the day, or hedgehogs weighing less than 500g, should be taken into care. The minimum weight that a hedgehog is expected to be before hibernation is 600g. At the moment, in Britain, it is quite mild and in Yorkshire hedgehogs do not appear to have started to hibernate. Those weighing less than 500g at the moment, will most likely not gain enough weight to be able to survive hibernation.
Posted by Toni Bunnell at 23:41 2 comments: